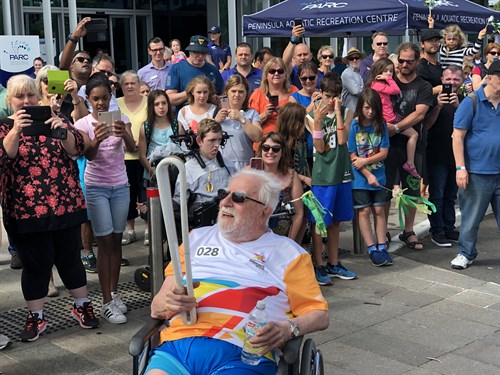 The Queen’s Baton carries a message from Her Majesty Queen Elizabeth II that calls the Commonwealth’s athletes to come together in peaceful and friendly competition. When the Baton arrives at the Opening Ceremony on 4 April 2018, the Monarchy’s message will be removed from the Baton and read aloud to declare the Gold Coast 2018 Commonwealth Games open.

When asked about carrying the Baton, Ray replied: “It was quite exciting! It was a bit of fun. I didn’t know I was going to lead the march, but I did. I saw about 10 of my relatives there.”

Ray was amongst eighteen legends from Melbourne’s south east that were given the honour to carry the Baton across Frankston City. When asked how he was nominated he replied, “My family were contacted to do it and they accepted on my behalf. It was an honour! There were only two of us from the Mt Martha area.”

When asked about his life achievements, Ray responds, “one of my achievements was founding the Mt Martha cricket club and being able to play sport for a long time.”

Ray has had an amazing life centred around family and community. His two favourite sports are cricket and golf. But it was through his love of cricket that led him to becoming the founder of the Mount Martha Cricket Club where he played for many, many years as a wicket keeper.

Born in Northcote, Victoria, Ray was one of three boys. His father, Victor, was born in Australia, whereas his mother, Aani, was born in England. Ray went to Northcote high school in Victoria and was in junior athletics and played Australian Rules football for the Thornbury club. When he left school, Ray worked for the State Electricity Commission, and later at IBM where he helped run the bureau. At the age of 23, Ray married an English girl called Josephine whom he met at a church dance. They moved to Boronia and had two children, Anthony John and Karin. Ray and Josephine became grandparents when their son Anthony John had a daughter called Cyd. Ray lights up when he talks of his family, and how his children and grandchildren are the most important people in the world.

In the early years, Ray and Josephine travelled regularly to the USA, Bali and Canada for holidays. Ray served in the RAAF but also found the time to train German Shepherds. Sadly, Josephine passed away around 19 years ago. In 2017, Ray moved into Mayflower Brighton’s residential aged care accommodation and enjoys having a beer or wine at happy hour. He loves reading Western novels and going to the cinema located in Mayflower. Ray is often found outdoors on the patio enjoying his beer or wine and reflecting on his love for sport.

We are very happy for Ray and to see him recognised for his achievements and to be able to represent the Frankston area during a very prestige event in carrying the baton for the Commonwealth Games in 2018. We are extremely honoured to have Ray as a resident at Mayflower Brighton.