7 Life Secrets of a Centenarian

7 Life Secrets of a Centenarian

Mayflower Brighton retirement village resident, Allen recently joined the centenarian club, so we sat down and had a chat about what he has learnt over his 100 years of life.

Allen on his 100th Birthday. Allen is proud of his achievements with the Brighton Bowls Club.

Lesson #1: Family is important. Make time for them and they will do the same for you.

It has been an unprecedented year, changing the way we live and connect. Allen adjusted quickly to the new way of living, with the support of his treasured family, who are his number one priority.

Allen celebrated his 100th birthday with a virtual party, organised by those he loves most. Everyone pitched in to make his day special, from his immediate family to grand nieces and nephews.

The highlight of the day? A video sending love from across the country, including a message from a family member serving in the military, and virtual tours of loved one’s homes.

As a keen “Doggies” fan, Allen loved hearing from great-nephew and Bulldogs football player Easton Wood. And he was most surprised to see a decommissioned WW2 Naval Sea Mine in his grandson’s front yard!

“There are so many good people in this world,” says Allen. “What a wonderful family I have.”

Allen’s family also made him a commemorative newspaper birthday card and gave him a gift box full of messages from dignitaries including our Prime Minister and the Queen.

“I’m one of the very few living Australians to receive both a letter from a king and a queen in their lifetime,” said Allen. “The first letter was from King George 5th, thanking my late father Joe for his service in France.” 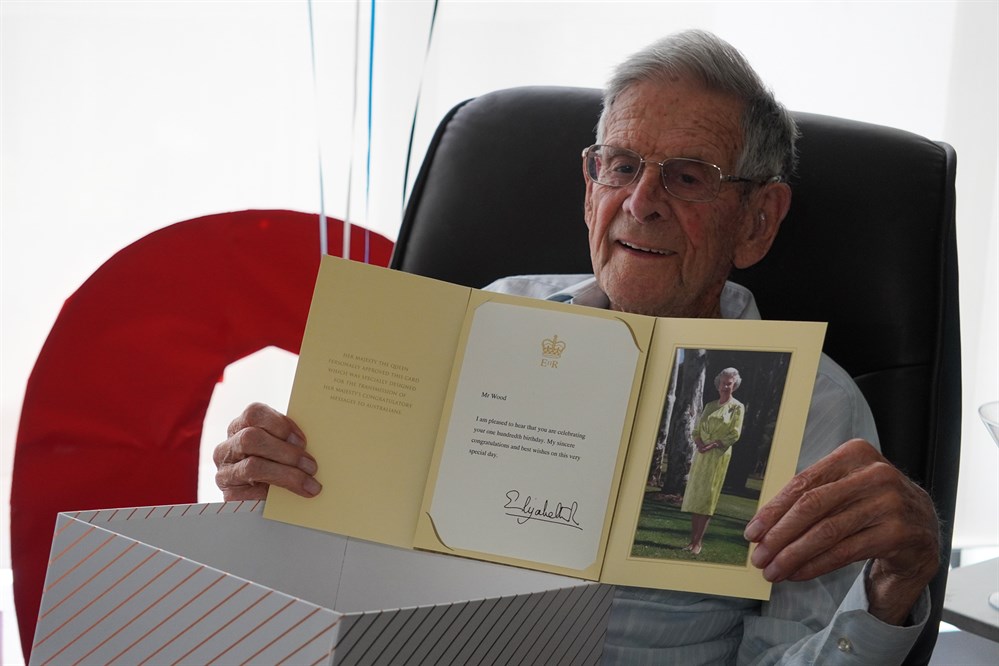 Allen received letters and cards from many dignitaries including: The Premier of Victoria, the Prime Minister of Australia, the Governor General, and without straying from tradition, our Queen, HRH Queen Elizabeth II sent in her best wishes and congratulations, too.

Lesson #2: Find a hobby you enjoy doing to keep your mind sharp and make new friends

Allen has enjoyed painting over his century of life and continues to enjoy his own art on his walls today.

He also loves Formula One racing cars and spent many hours building a replica of the Red Bull RB7 which was built for the 2011 Formula One season.

Allen says he was fortunate to have the services of a bowling mate, Rob, to look after the radio control assembly on the car for him, and they were both delighted when they took it for its first test drive.

These days Allen enjoys putting together 3D mechanical wooden puzzles to keep his mind sharp - such as a very technical and antique themed wind up clock.

Bonding over technical 3D puzzles prior to self-isolation, Allen received regular visits from friend Peter, who would help him with the fiddlier parts of the puzzles.

“The clock alone had 130 pieces,” says Allen, “and it took a long time to complete together so I shouted Peter one too.” 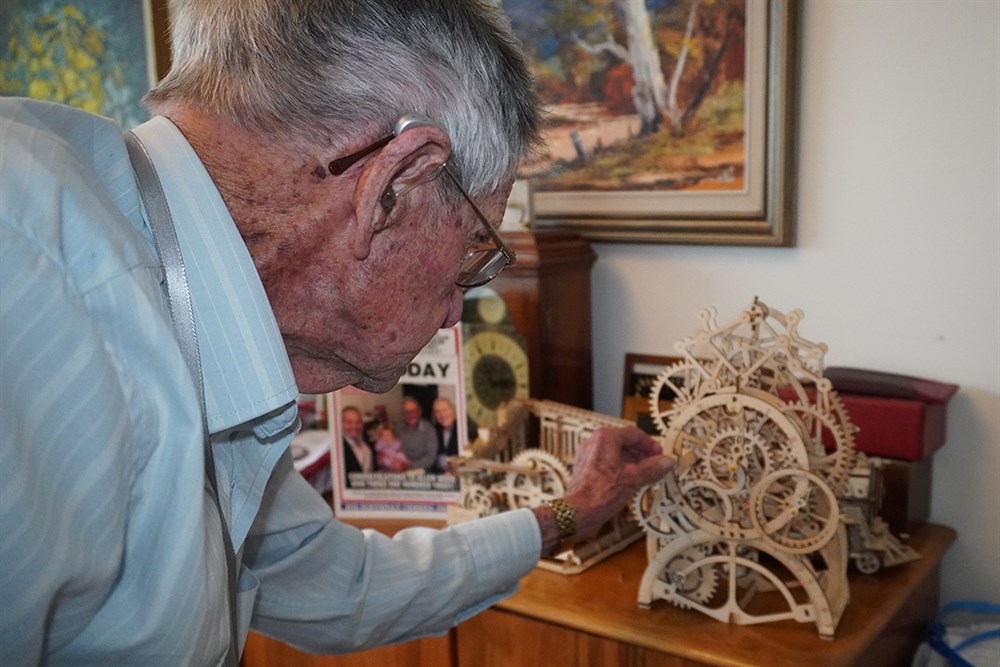 Allen is well known as someone to be consistantly tinkering away at something such as gardening or puzzles.

Lesson #3: Live within your means and make wise financial choices

“Dad worked in hard times,” says Allen. “There were very low wages and not much opportunity, with little hope of improvement for a long time.”

The Wood family persevered by remaining positive and frugal.

“We survived by making the best of the situation,” says Allen.

This approach to life rubbed off on Allen, who later worked hard to grow his savings.

“If you can build something yourself, and save a lot of money, why wouldn’t you?” says Allen.

“One of my greatest achievements is becoming financially independent by investing in stocks. Last year I was able to make money without doing anything.” 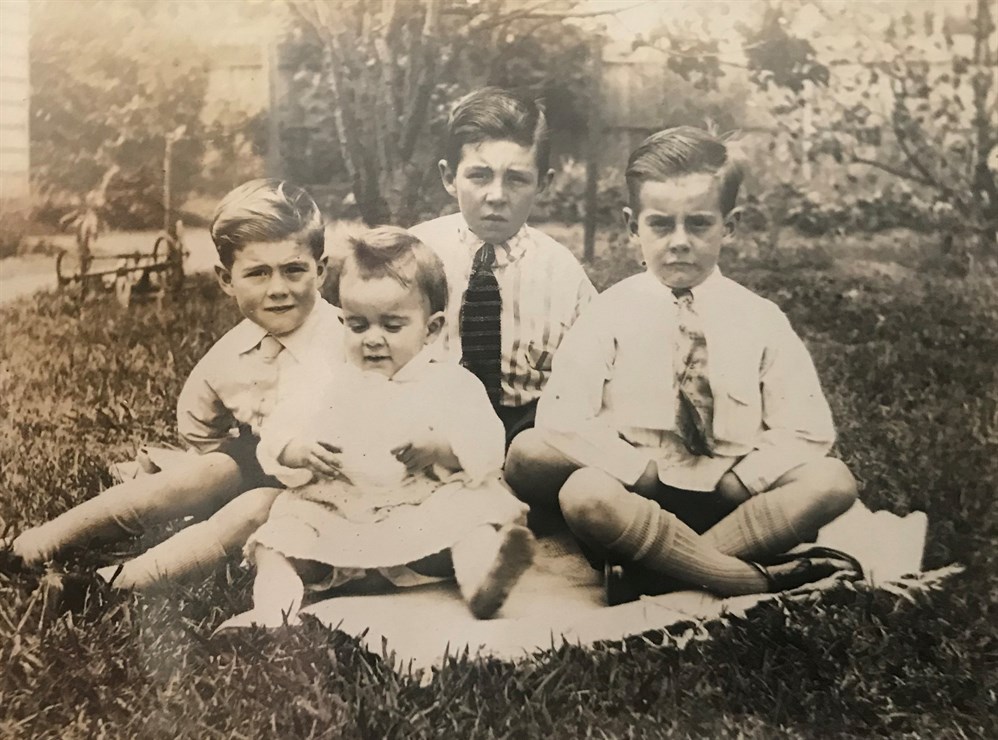 Allen had 3 brothers Lawry, Jack anf Ted, and was the second eldest - pictured on the far right.

Lesson #4: Honouring your heritage can help secure your future

Allen comes from a long line of general grocers, starting with his grandparents, who were born in the mid-1800’s.

An unusually independent woman of her time, Allen’s grandmother, Margaret bought a general store in Highett, after she was widowed at the young age of 32 and pregnant.

Allen’s father, Joe, wasn’t able to follow in Margaret’s clever footsteps until the fog of Great Depression started to lift. It was at that time that the family’s frugality paid off, and Joe was able to buy a general grocer in Brighton.

“Dad bought the general grocer on Durrant St in Brighton, where Durrant Medical Centre now is. We lived in the house next door.”

Those early years had a real impact on Allen.

After serving as a medic during WW2 for the Australian Airforce in Papua New Guinea and the Pacific Islands, Allen headed back to the grocery life he knew and loved.

In 1946, Allen and Joe went into business together, opening what was quick to become a well-regarded wholesale grocer in Bay St, Brighton. The successful business eventually supported and supplied for a new style of grocery shopping – self-service. “The business supplied 55 stores at the time.” Says Allen.

“I was fortunate enough to be chosen to do two overseas tours, investigating the latest in retailing and wholesale”

Allen continued managing the Brighton District Grocers Association until age 62, as the larger chain supermarkets started to impede on business.

This gave him the opportunity to enjoy a comfortable retirement. 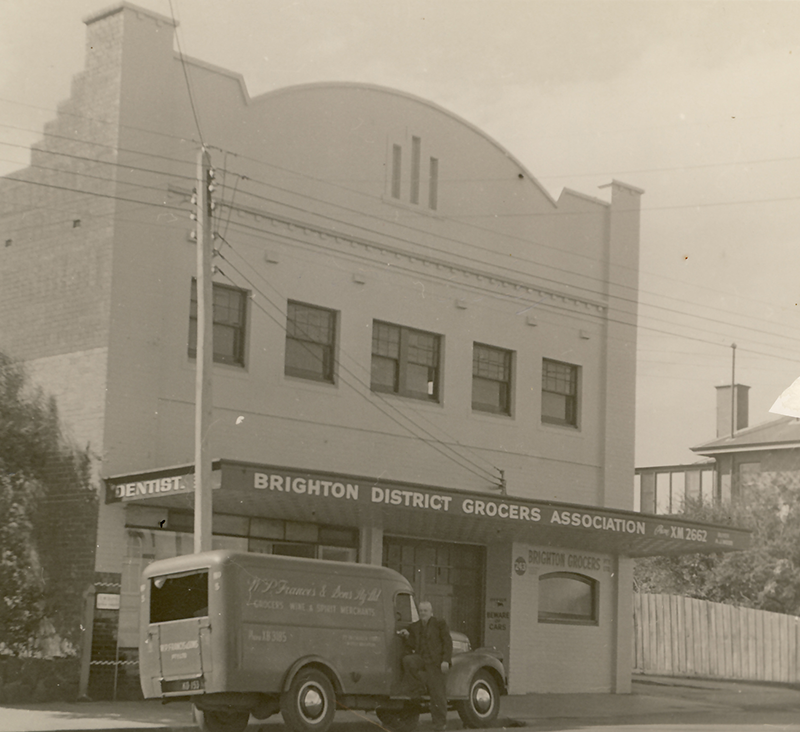 Pictured above: Brighton District Grocers Association. Self-service later changed the way people shopped for their groceries, with less personalised service and breaking down the familiarity of the relationship between customer and grocer as a service provider. The wholesale grocer supplied goods for 4 Square Stores, eventually became a major supplier for RG Withers, now known as 7/11 stores.

Lesson #5: You never know when you might find love

During the war, Allen met the love of his life, Margery.

Margery served in the Women's Auxiliary Australian Air Force (WAAAF) - the first military organisation in Australia for women which focused on skills other than tending the sick or injured.

Allen met Margery when she was working behind the counter at the Richmond Airbase in New South Wales.

“I met Margery while submitting my papers to register to be stationed in the base,” says Allen.

Then adds with a smile, “I thought to myself, she’s a beautiful girl.”

The pair fell in love on the base, attending social dances.

“We would go to these dances together,” says Allen, “and we couldn’t help but fall in love!”

The pair were married after the war, and their happy union brought along two daughters, Judy and Val.

With blood, sweat, and tears, Allen built their first family home himself in Beaumaris at age 26, avoiding a mortgage to repay.

“It took me 3 years to complete,” says Allen. “I would spend every holiday and weekend working on the house. I was offered a mortgage at the time, which I declined. It would have taken 30 years to pay off.”

Allen and his wife Margery believed in living life to the full.

The pair fell in love while dancing and continued to take every opportunity to put on their dancing shoes throughout their years together.

“As a young boy I would dance at any opportunity!” says Allen.

They also shared a love of travel and enjoyed kicking up their heels in far away lands when they could.

“We were fortunate to visit a lot of countries.” says Allen.  “We had a ball.”

When Allen reached the age of 50, he felt it was time to increase his leisure time and joined the Brighton Bowls Club.

Allen had a wonderfully successful bowling career there, spanning 41 years. He served as the club’s president, achieved a lifetime membership award and made many friendships that continue to this day.

Allen is also known by his friends and bowling mates as a wonderful host, organising many a large gathering and Christmas party during his time at Brighton Bowls Club.

Lesson #7: Stay fit and socially active, with a well-balanced diet.

Allen believes that keeping socially and physically active has also kept him young, and his daughters agree.

“What is the secret to a long healthy life style? It’s no secret – it is just good common sense, really” says Allen with a hint of a cheeky smile.

“Dad has always been very involved with the bowls club and is still in touch with his friends,” says Val. “He keeps fit too, going to the Mayflower gym, doing weights and still uses the treadmill at 100 years old.”

Being active doesn’t just mean gym work for Allen. It extends to other pleasurable activities, like gardening.

“Dad maintains the vegetable garden at Mayflower, and delights in sharing the produce with other residents,” says Judy. “He planted a new row of carrots just recently.” Allen added, “it is a large plot, and has been very successful!”

Allen prefers a balanced meal with meat and vegetables as the main ingredients.

“I would say number seven is the most important lesson I have learnt,’ he says.

“To stay fit, socially active and to keep a well-balanced diet. That is really the key to my long life and for me staying healthy.” 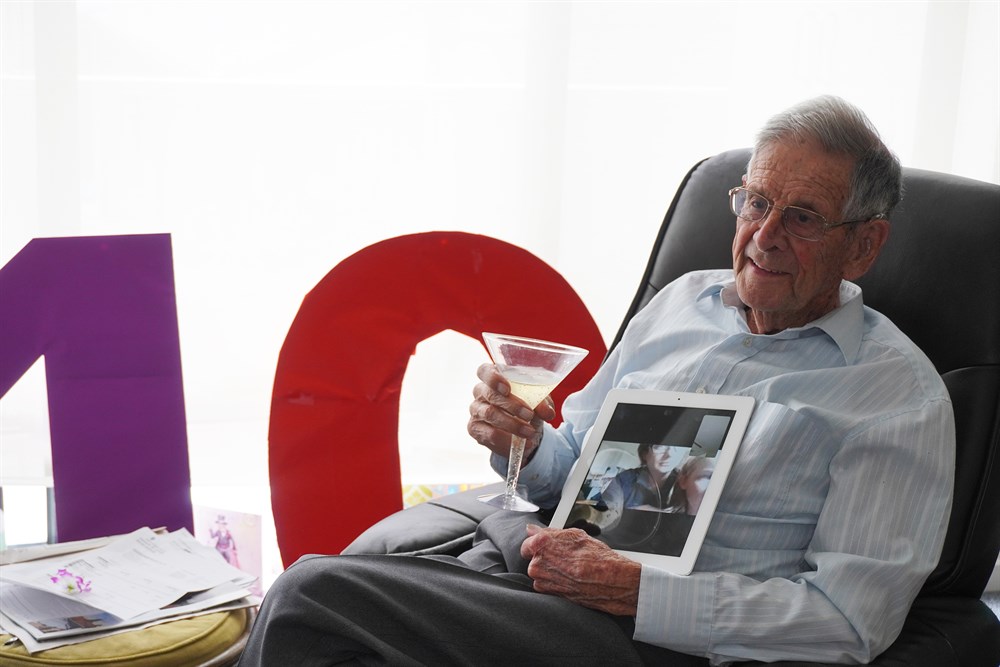 This year, with social distancing in place, Allen celebrated his 100th birthday - with the help of technology. 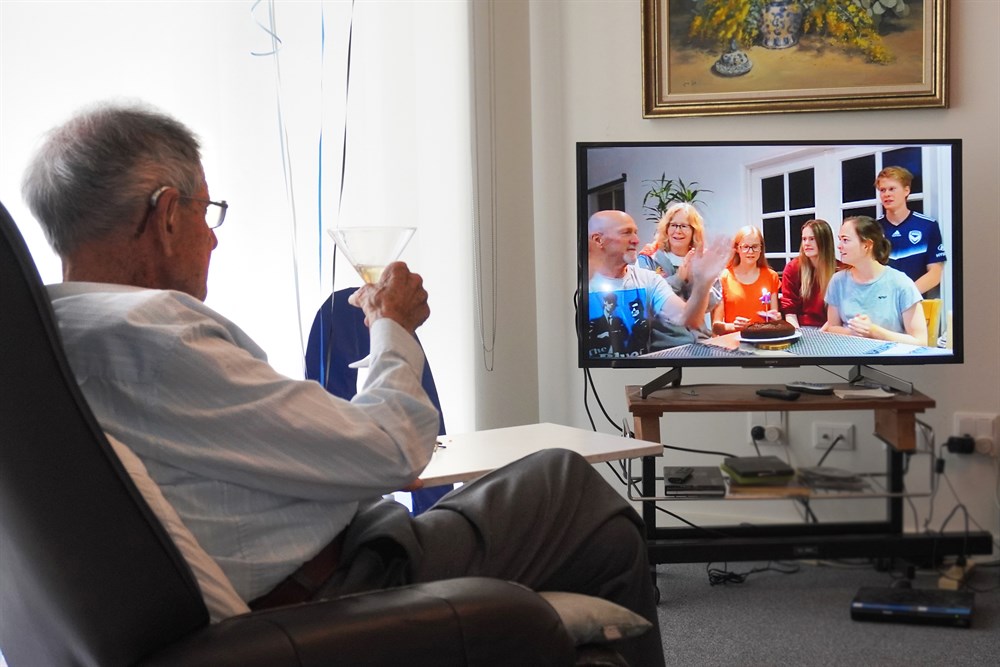 Party from afar - the video complilaton his family sent in allowed Allen to celebrate with everyone. 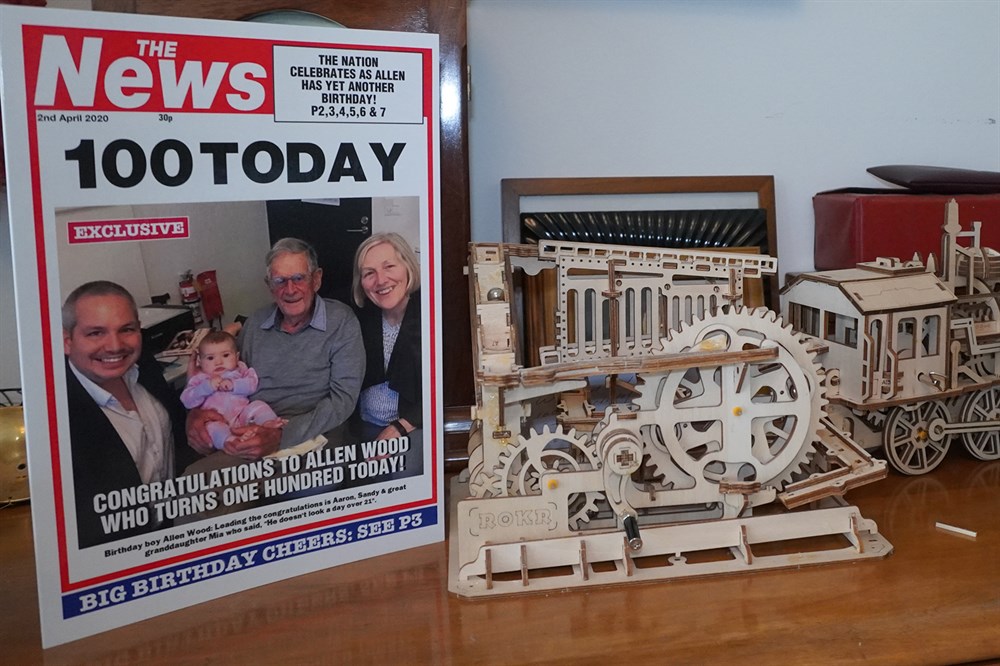 Good news gets around fast! Allens family sent in a personalised card, picture along with some of his wooden puzzle creations.

Some more lovely art by Allen. This is an aerial view of school chilldren on a pier. 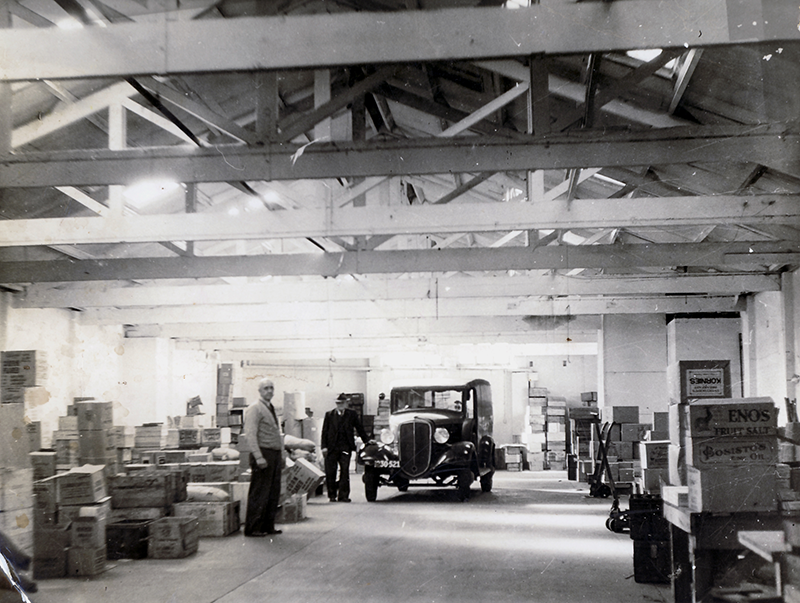 Photo taken from inside the warehouse. 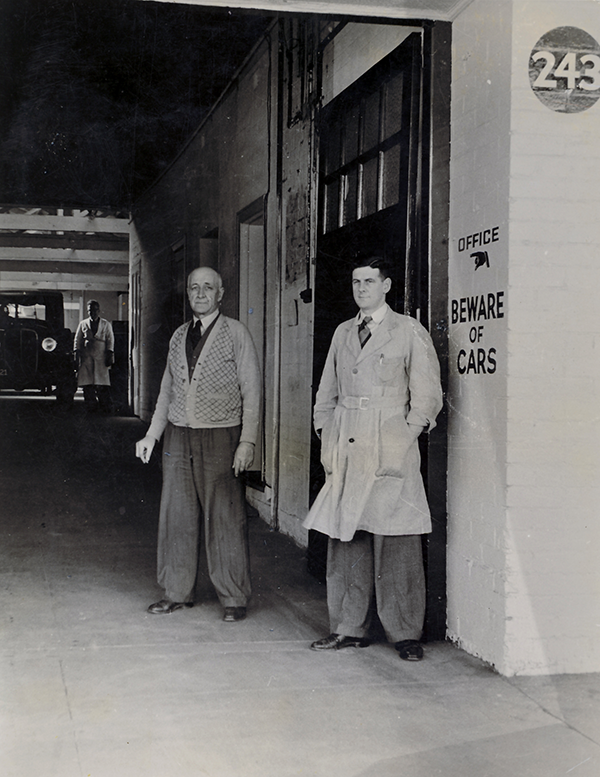 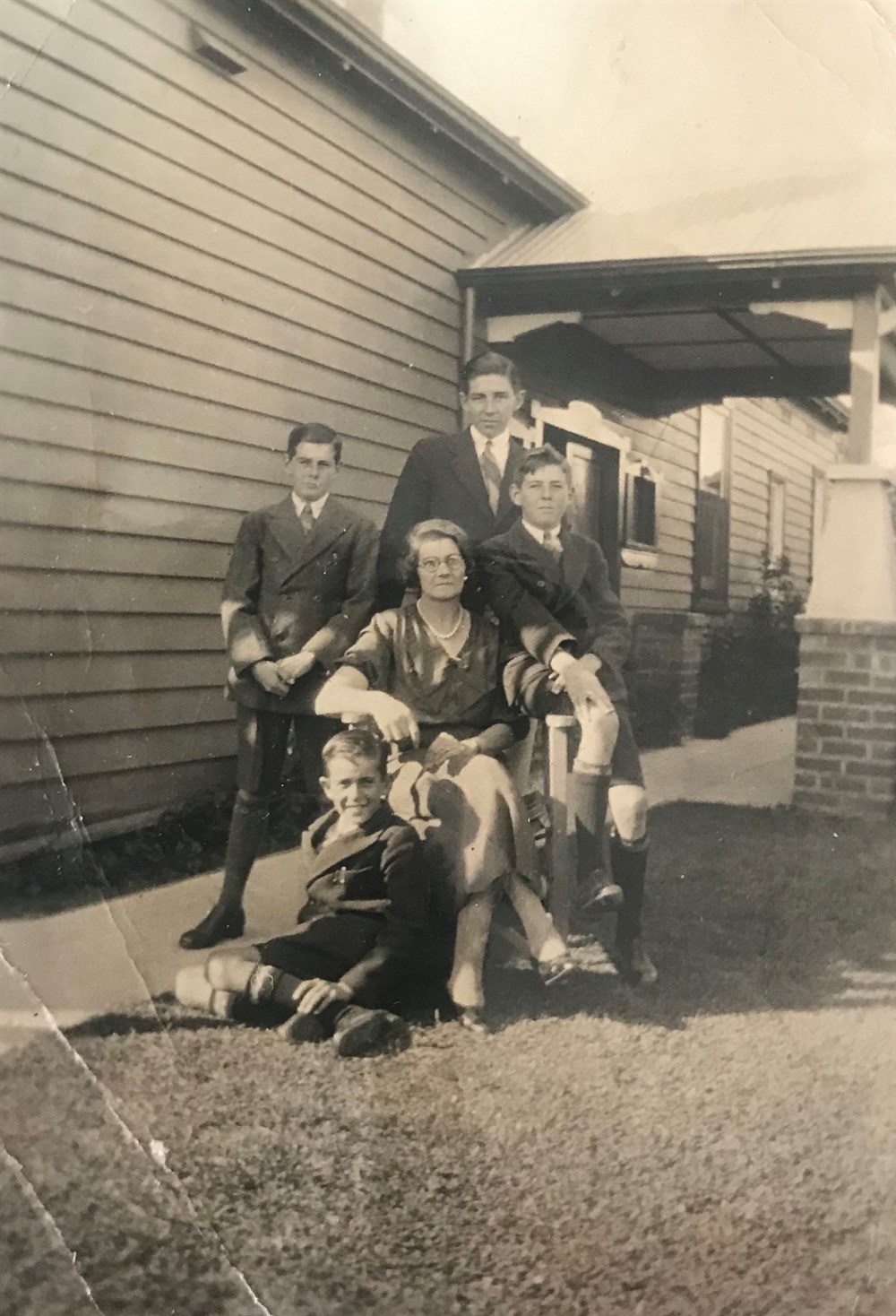 Allen with his mother and brothers. Allen is pictured next to his mum on the left. 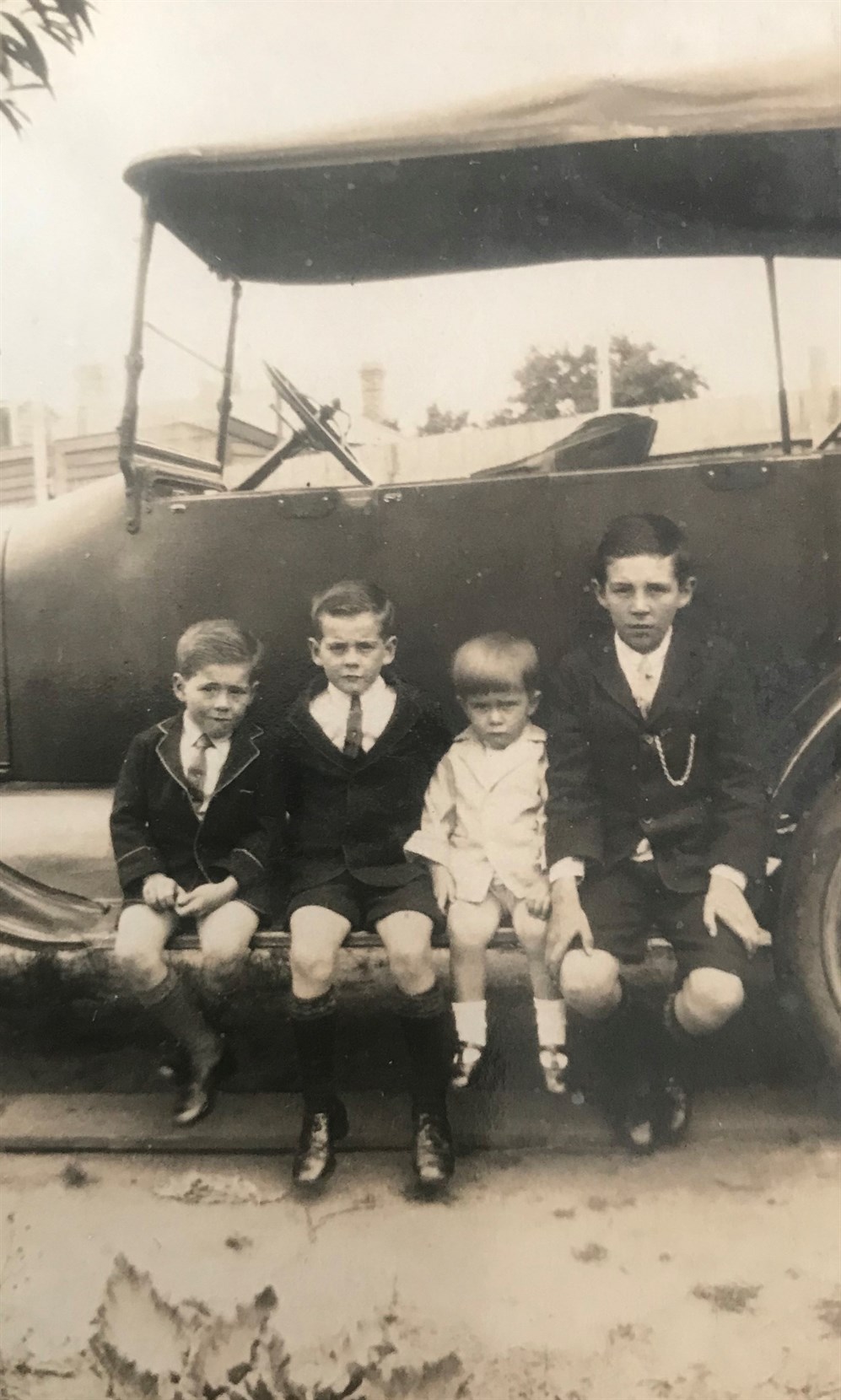 And even younger again, Allen is pictured here on a Model-T Ford, second on the left, dressed handsomly.