Every year at 11am, on the 11th day of the 11th month, we stop to observe one minute’s silence, in memory and respect of those who died or suffered in war and armed conflicts.

We pause to observe a minute’s silence to remember not only those we lost, but all who came home and whose lives were changed forever.

At Mayflower we honour the fallen and those who served still living among us.

As part of this tradition, we recently spent some time with resident Frank, who served as a Navel Coder during the Second World War to learn about his story.

Frank shares his experience and memories with us below, in his words. 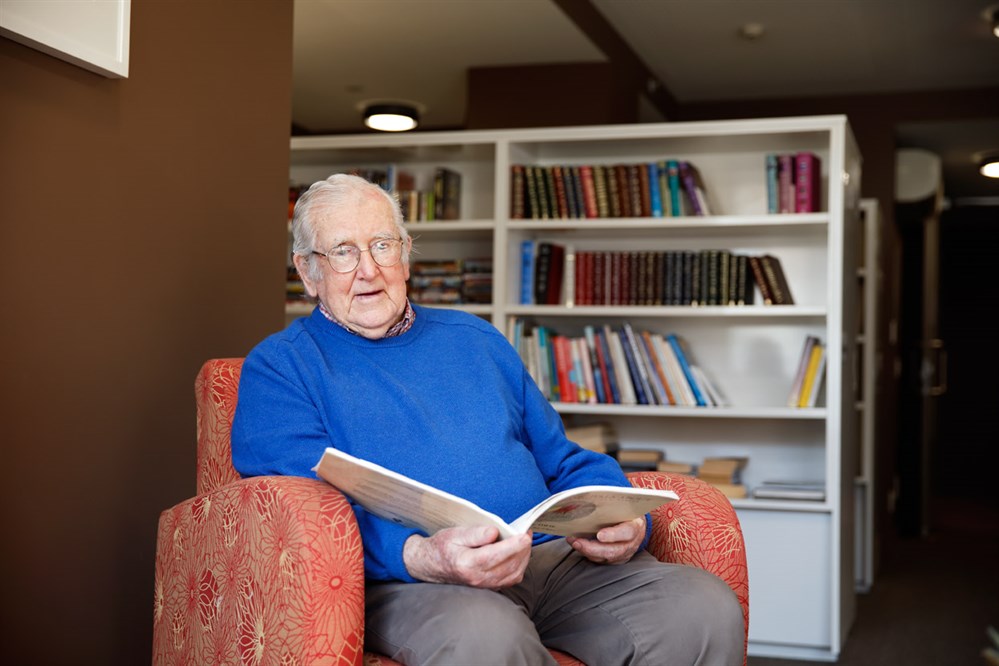 Pictured here, Frank spends time in the library. and tells us about the

At the end of the First World War, the Royal Australian Navy established a body of trained observers along Australia’s extensive northern coastline to give warning of hostile, dangerous, or convert activities in the South Pacific.

This volunteer civilian coast watching organisation grew to comprise of around 800 people.

In September 1939 war was declared, and Retired Navy Officer, Commander Eric Feldt took charge of establishing a formal network of Coastwatchers comprising of Army and Navy personnel and was later supported by Commander JC McManus.

The Coastwatchers were stationed on remote Pacific Islands. The intelligence they gathered is often credited with turning the tide of the war in the Pacific.

The operations were collectively known as FERDINAND, from the children’s storybook, with the code name “Bull”. In The Story of Ferdinand, the gentle yet noble bull refused to fight. The code-name reminded the Coastwatchers that their job was to observe.

Each Coastwatcher team consisted of a leader, two wireless operators, a utility man, and an operative with medical knowledge.

The majority of team leaders had experience in administration with the Australian New Guinea Administration Unit (ANGAU), and in plantation management.

Commander Feldt held the position of mine warden in New Guinea during the Inter-War years. He knew well the territory and its people. Both commanders were good natured men who welded field leaders.

A group of Telegraphists and Navy Coders, of whom I was one, were sent to Port Moresby to work the communications with the Coastwatchers. I had my 18th birthday in Port Moresby.

A Coastwatcher was efficient as radio operator and was capable in the handling of small arms such as Tommy guns, Owen guns and hand grenades, as well as booby-traps and limpet mines.

Much could be said of the activities of a covert body behind Japanese lines charged with gaining intelligence of enemy troop and supply movements, shipping and boat movements, airport and aircraft activities, destroying arsenals, and applying limpet mining to ships.

Training of field operators was generally completed in Brisbane and Beaudesert. Movement through Port Moresby or from Brisbane, was done by submarine or Catalina flying boat.

The training of specially selected indigenous representatives from island groups and territories was also undertaken in Brisbane and Beaudesert. Their services were indispensable – and their loyalty an imperative. Capture of any Coastwatcher member meant execution.

The Coastwatchers, great intelligence gatherers, helped to change the direction and duration of the Pacific War. The success in Coral Sea Battle, in May 1942, resulted from their exploits.

I laud their service.

In 1942, when the Japanese forces seemed unstoppable, Dutch Minesweeper HR. MS. Abraham Crijnssen, was ordered to leave the Dutch East Indies for Australia.

The naval vessel is well known for its escape under the camouflage of hundreds of small trees and branches. The aim was to foil Japanese aircraft into thinking that the ship was indeed a very small floating island.

Sailing only in the dark hours, the Crijnssen escaped detection, making the journey from Java to Geraldton in Western Australia in around nine days.

It was a cat and mouse journey due to the skilled seamanship and courage, but further challenges lay ahead as she sailed onto Sydney.

As a Navel Coder, I was assigned to duty on the Crijnssen when she was at Garden Island in Sydney. Another hazardous journey was about to unfold - a battle with the ocean itself.

A terrible storm struck in the Tasman Sea, extending into the Pacific Ocean.

In-tow of the Crijnssen was an oil field submarine intended for Anchorage in Marauke, in the Papua region of Indonesia, then known as Dutch New Guinea.

In ferocious seas off Sydney, the tow-line for the submarine snapped. The sky was black. The submarine was afloat, without lights. Naval command was notified, and a Catalina seaplane entered the search. The submarine was located the next day beached near Sugarloaf Point, north of Newcastle. Further towing was abandoned.

The storm had damaged Crijnssen‘s wireless equipment, and below decks had been awash with the ocean. Waves had reached 30 feet.

Seasickness for all but the captain and a few seasoned sailors made normal watchkeeping impossible. Bridge duties were an hour long or less. Duties in the wireless room were severely restricted.

The ship returned to Sydney for radio repairs and restoration, and the Crijnssen then sailed north to the Arafura Sea.

Duties were assigned, and included convoy escort, minesweeping, boom-gate duties and refuelling of American torpedo boats at the now famous Ashmore Reef famous as the stopping point for refugees en route to Australia from Indonesia.

The ship was returned to the control of the Royal Netherlands Navy in 1943, but remained in Australian waters for most of the Second World War.

I left the ship in mid-1946 returning to Australia from Singapore. The Abraham Crijnssen is now housed in the Dutch museum at Den Helder, Holland.

The vessel was named after a famous 17th century merchant Seaman.

My daughter Rosie, and granddaughter, Sarah, have walked the decks of Abraham Crijnssen - mindful, that a 95-year-old father and grandfather walked them some 75 plus years ago.

Frank loves the written and spoken word, "words are all we have," says Frank.