June and Maurie have a heart for family and serving others. They are popular members of the Mayflower community, and are always ready to share a good yarn, having lived a fortunate and interesting life.

June and Maurie started their lives together in an unusual way, by meeting at Kmart in Bendigo. The two hit it off quickly and were married soon after. 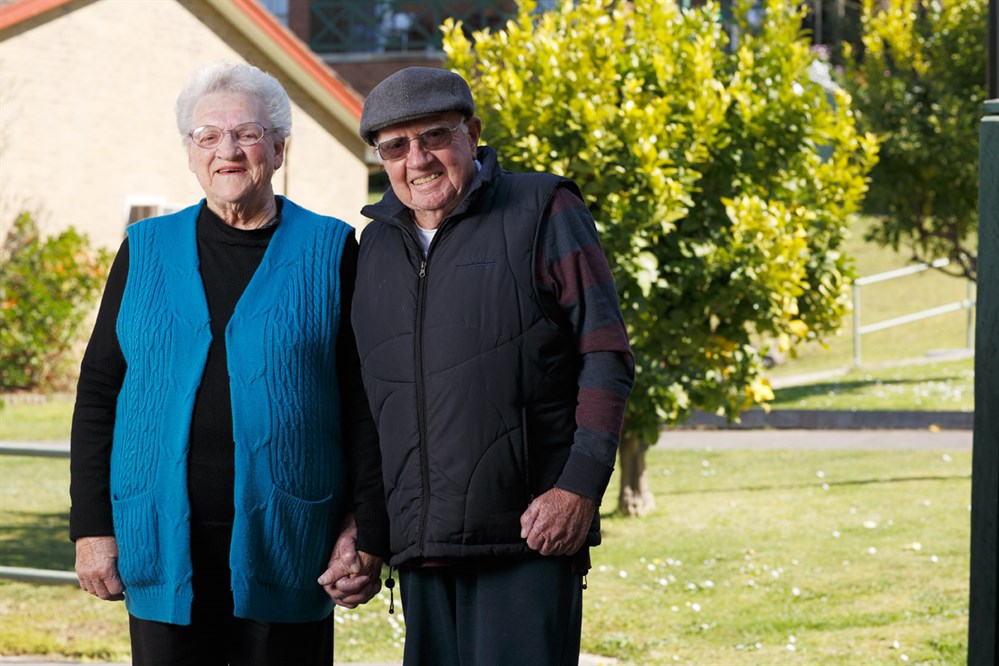 June and Maurie love the open country feeling of the Mayflower Macleod Village, and the nature it brings, “with the trees all around, it feels more like the bush. We’re amongst the gumtrees, and there’s plenty of birds around.”

Before the pair met, June was fortunate to have eight children - six boys and two girls – with her first husband who sadly passed away after a happy 27 years together.

The wonderful results of this first union mean that June and Maurie are now happily surrounded by a very large and loving family.

Spring appears to be a special time for the family, with many of them born in in the month of blossoms and new beginnings.

“September can be an expensive time for us,” laughs Maurie, “and our family keeps on growing.”

Maurie and June have recently received some great news and look forward to a trip or two to Queensland, as soon as the borders open up.

“Two more grandchildren have just got engaged. This time we’re hoping for a double wedding,” they chorus.

June and Maurie have travelled extensively - working, living and holidaying across Australia.

Maurie particularly treasures their visits to South Australia, where his brother and sister live.

Their favourite place is Victor Harbour, where a special moment took place 37 years ago.

“I popped the question in Victor Harbour, on New Year’s Eve in 1983,” says Maurie, and June was happy to oblige.

“Maurie thought it was a good idea to get married,” she says, “and I thought yes - that’s fair enough, and the rest is history,” says June.

Maurie and June are looking forward to when they can return to their special place.

“I can’t wait to go back, and see my family again,” says Maurie.

Working for the greater good

Maurie is a war veteran who served as a leading dozer operator in the Australian Army, clearing trails in New Guinea during the Borneo confrontation from 1960 to 1966.

Since then, he has supported local veterans as a vice president in the local RSL auxiliary, alongside June in the ladies RSL auxiliary.

Providing social support to local soldiers was an important part of their work, and June and Maurie fondly recall hosting many special dinners for local veterans.

“We held a dinner every fortnight for the diggers,” says June. “It certainly kept us busy.”

June and Maurie are also closely involved with the Country Women’s Association (CWA), with June joining the organisation at the tender age of 15.

June was the President of the Goulburn Valley CWA, and the pair spent a lot of time travelling together, supporting local communities.

Working together as a team meant Maurie was adopted by the CWA family.

“Maurie was christened ‘Mr CWA’, because he is always supporting me. He helped set everything up, even the creative arts exhibitions,” saysJune.

For a time, June wasn’t able to drive due to an injury, so Maurie would escort her to all her CWA meetings, and pop in just in time for lunch.

“I would always be given a good feed!” says Maurie.

Later, June was the president of the Brisbane Valley CWA.

“I was there for 3 years, then we moved up to Gympie to live with my son, and I became secretary of the South Bernet group, and later president,” says June.

June continues her work and is still involved with the Shepperton Branch of the CWA , which gives much needed support to local communities in times of trouble.

“We work closely with the fire brigades during bushfires, providing them with meals and support,” says June.

“We also lobby the government, deal with social and environment issues, and continue to hold our infamous cooking classes with the public.”

“We were the caretakers on the cattle farm, and spent a lot of time fighting fires together.”

“We would often be out at 2am putting out spot fires with a 44 gallon drum,” says June.

“We were on the Brisbane Valley highway – and cigarette butts were often thrown out of moving cars. It was not unusual to have a small fire every day”.

The repeated threat of fire and dry conditions wore thin over the years, and at times June and Maurie feared the worst.

“It was during the drought,” says Maurie, “and at times it was quite worrying.”

To keep themselves and their property safe, Maurie rigged a fire fighting kit on his ute, and used it regularly while feeding the cattle.

“It would take more than four hours to drive over the rocky terrain and feed the cattle,” he said.

Secrets for a happy marriage

June and Marie have been married 37 years and believe working together has helped to keep their love strong.

“We’ve done most things together,” says Maurie. “Running the cattle farm, helping the community, fighting fires – we are a team. We even managed caravan parks,” he adds.

June agrees that their time spent working together helped build a stronger relationship.

“That’s a big part of it, working together, which led us to understanding each other better,” says June. “We share interests which helps keep us connected too."

“We both adore orchids and share that love. Our lives really revolve around each other,” she says with a smile.

June adds that their personalities complement each other too.

“Maurie is very even tempered. I’m inclined to fly off a bit, so we balance each other out.”

Maurie and June moved into Mayflower Macleod in early 2019.

Although they miss the country life of Shepparton, they love their new home which is nestled in native gardens and the country feel it brings, as well as being closer to one of June’s daughters.

“I couldn’t have moved into an ordinary suburban unit,” says June. “With the trees all around, it feels more like the bush. We’re amongst the gumtrees, and there’s plenty of birds around.”

In non-COVID times, Michelle, the Village Coordinator, keeps residents busy and engaged with plenty to see and do.

“It’s great here when there’s no restrictions,” says June, “because we have our happy hours and bus trips and things like that.

“It is a really lovely village - very friendly - and we are like one big happy family, and Michelle is marvellous! She drives us all around in the Mayflower bus and we have great fun together.”

June and Maurie are keeping themselves busy during lockdown.

With humour in her voice, June talks of her healthy obsession.

“Some are made just in case - for kids that haven’t even been conceived yet. My great-grandkids want something for their future babies to remember me by.”

Maurie has been busy in the garden when the sun comes out, and enjoys doing handywork around the home wherever he can.

“I love it here, and love pottering in the garden when the weather is good,” says Maurie.