Another Win for Mayflower Macleod

Another Win for Mayflower Macleod

With a wide grin, comfortable manner and just a hint of larrikin, Laurie Connor has been a welcome addition to the Mayflower Macleod community. This busy community minded man made Mayflower Macleod home early this year, and says he couldn’t be happier. 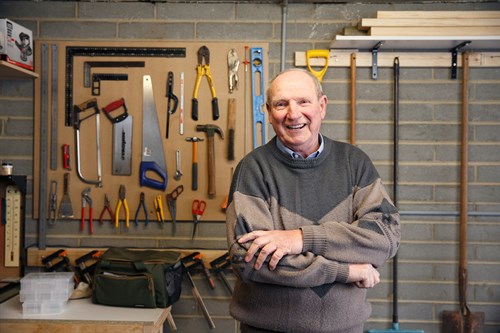 A boy from the bush, Laurie was born in the Mallee town of Mildura. His early years were characterised by carefree freedom as he spent his days running around the bush and orchards that flanked the Murray River.

Sadly his mother passed away when he was 7, resulting in his family being split up. Laurie and his two brothers were placed in an orphanage, and his sister sent to live with relatives. Laurie’s father worked hard to get the family back together, and they were reunited when Laurie was 10.

Four years later Laurie left school to take a printing apprenticeship (which were 6 years in those days) before joining the Army. It was these early years of hardship that formed a commitment to serving the community and fighting for his country.

Laurie’s time in the Army was busy and action-packed, being sent for duty to the Thai border, Borneo, the Malay Penisula and Vietnam. A proud infantry soldier, Laurie enjoyed the camaraderie of the Australian troops and still catches up with his old Army mates to share a few tall tales. After his time involved in overseas conflicts, he joined the Army Reserve travelling through Australia and overseas.

Retiring from the army with the rank of Sergeant after 20 years, Laurie’s life didn’t slow down, marrying and raising two boys while returning to the printing industry.

Retiring back to a small hobby farm in the Mallee when his two sons finished university, Laurie took on the role of Justice of the Peace for the small town and its region, which kept him busy.

His unwavering service to the community didn’t stop there. He was President and Welfare Officer for the local RSL for many years, as well as a volunteer firefighter for the CFA. Laurie was awarded the National Emergency Medal for Sustained and Significant Service during the Black Saturday Fires in 2009, as well as a few long service medals.

In 2017, Laurie reluctantly sold the farm due to a ‘crook ticker’ and moved into his independent living unit at Mayflower Macleod shortly after.

Far from slowing down, Laurie continues to keep busy with his JP work, has joined the local Probus Group, is a member of the Watsonia RSL Angling club and attends the Banyule Men’s Shed 3 times a week. He also faithfully returns to the Mallee every Anzac day to catch up with the old Diggers and war widows that he helped during his time with the Piangil RSL.

“Sometimes there are not enough hours in the day” for this busy and active retiree who overcame hardship to dedicate his life to serving his country and community.