The AFL Grand Final is a day of great excitement at Mayflower Reservoir.

Mayflower Reservoir residents and staff celebrated a special Grand Final happy hour with great enthusiasm. Dressed in their favourite team colours, with a good contingent of loyal Collingwood supporters, everyone settled in for an afternoon of footy games and entertainment.

Some residents steadfastly refused to change team allegiance to the local team against the West Coast Eagles. Hawthorn, Essendon and Richmond were all well represented, with some good-natured ribbing about ladder placement.

Essendon fan John Nicol remained faithful to his team as he accepted the trophy for winning the Mayflower Footy Tipping Competition for 2018.

But fear not, the Mayflower Collingwood cheer squad, led by volunteer Nellie and resident Josef were vocal until the end. Josef did try hard to get his wife Janis to defect from Richmond with no success.

The afternoon’s entertainment included the popular handball competition, with Peter Diamantakis taking out the first-place trophy. Tony Venetakis and Joe Parnis followed him taking second and third place respectively, after some spirited competition.

Finally, it was time for everyone to tuck into a feast of footy favourites. Pies and hot dogs with plenty of sauce, of course, what would football gatherings be without these treats!

As Josef and Janis made amends, and John packed away his Essendon scarf for another year, talk turned to the summer sports of cricket and tennis. Everyone agreed that this year’s grand final celebrations ended up very exciting and perhaps now a spot of relaxing cricket is in order. 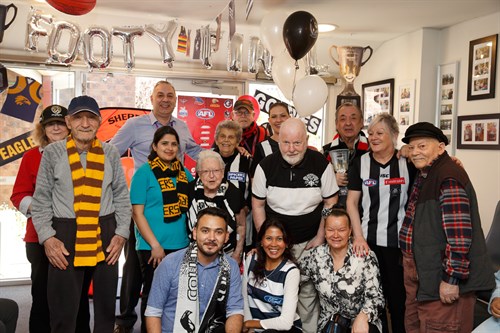 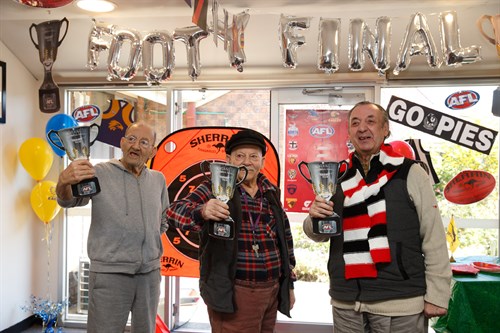