"Time is important, it is what we need to share with others". Mayflower Macleod residents, Don and Rona McKenzie have spent many years sharing their time, providing emotional and spiritual support, to those in need. 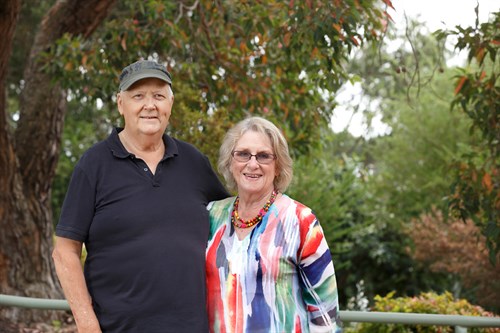 Fate seemed to guide Don and Rona together. They met when Rona was visiting and attending to her parents in the same aged care facility where Don was volunteering.

Don's wife had passed away a few years earlier and Don virtually became a full time, and much valued volunteer, providing loving pastoral care for the aged care residents.

Rona was in a similar situation; her husband succumbed to Mesothelioma at home where Rona had nursed him during three heartbreaking years.  Twenty-five years earlier Rona, her husband and four teenage boys had migrated from South Africa and very quickly became 'fair-dinkum' Aussies!

This warm-hearted couple married 8 months after meeting, to the delight of the resident community. Together they then continued to touch the lives of the residents and family members. Don's previous experience of 18 years as a taxi driver around Melbourne gave him plenty of occasions to lend a kind ear and help others.

Rona previously had been a full-time counsellor at a community-based church.  There she attended to persons from churches as well as the community.  It was with great sadness that she came to understand how high a number of those seeking help with other issues in their lives, had, in fact, been victims of childhood sexual abuse.  She felt very humbled when they shared their lives with her.

Together, Don and Rona received the 2007 Aged and Community Services Australia (ACSA) 'Volunteer of the Year' Award for the development of an extensive Pastoral Care Program for the residents at Australian Unity Villages, their families and staff members.

After volunteering, Don and Rona travelled extensively throughout New South Wales, Queensland and the outback in their motor home, and then settled at Mayflower in November 2017. They love the independent living villas.

Don and Rona quickly became a valuable part of the Macleod community, offering a friendly ear and kind word for other residents.  Don feels it’s important for village residents to look after each other to achieve emotional well-being. “It is important, for both the giver of kindness, and, the gracious receiver of those kind deeds.”

The Macleod community has been strengthened with Don's input, help and encouragement.  He is much appreciated, and his life-experienced jokes .. hilarious!  He is delighted to be joined by several residents who enjoy providing practical support to their neighbors who need a hand.

This much-loved couple continue to spend their time helping and supporting others. Their care is appreciated and embraced by everyone in the village. For themselves, Rona declared “Mayflower Macleod is the place to be”.